The external cavity contains a two lens telescope, which is adjusted to infinity, i.e. the cavity is self-imaging and all transverse modes are degenerate. As a result, there is a 1:1 feedback for every point in the VCSEL onto itself. This ensures that self-localized solutions like spatial solitons can develop which do not dependent on transverse boundary conditions, but are stabilized by nonlinearity.

At the so-called Littrow frequency, the diffraction grating behaves as a conventional mirror (illustrated in panel a of the figure), i.e. all rays – independent of angle of incidence – are reflected such that there is a closed path in the cavity after one round-trip. 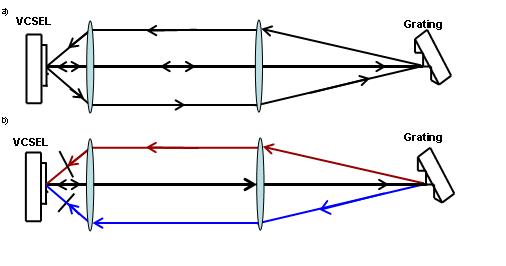 The setup is frequency-selective but in a peculiar way. If the frequency of the field is not at the Littrow frequency, the rays still return to the same location but at a different angle (illustrated in panel b of the figure). Since the resonance in the high Finesse VCSEL cavity is angularly selective, it will hence reject these rays, if the frequency detuning and thus the angular tilt is too high. We find that a stable soliton is still formed, if its frequency is slightly off the Littrow frequency. Then the wavefront of the returning beam is tilted (indicated by the black bar in panel b). From general soliton theory one expects that the soliton reacts to the wavefront tilt by a drift. Indeed we see a spatial shift depending on frequency, which is interpreted to result from an interplay of the grating-induced force and a pinning defect in the device. Under some conditions a localized excitation detaches and drifts (see Tanguy et al., PRA 2008, for details).

The origin of the bistability of solitons can be understood in the following way. Initially, the Littrow frequency is adjusted to be lower than the longitudinal resonance of the VCSEL cavity. All high order transverse modes of the VCSEL are at higher frequencies than the latter. Hence, there is a gap between grating frequency and VCSEL resonance, in which no linear states are allowed.

If now the intra-cavity power increases (e.g. due to a fluctuation), the carrier density decreases due to stimulated emission and due to the strong amplitude-phase coupling in semiconductors (described phenomenologically by Henry’s alpha factor) the refractive index increases. As a result, the longitudinal resonance of the VCSEL shifts to lower frequencies and becomes closer to the grating frequency. This increases in turn the intra-cavity power and hence there is positive feedback giving the possibility of bistability.