Our research focuses on development of new methods for creating and probing matterwave interferometers.

Paper: Detection of multiple forces at same time with a BEC interferometer

Our latest paper uses a symmetric matterwave interferometer, with an 87Rb BEC, to measure the background level of magnetic and gravitational forces simultaneously. A key result is that we have devised a method of measuring the ambient forces that are always present in the lab, even though these are too small to be detected in normal operation. The trick we use is to apply a number of known magnetic-field gradients to the system and to use precise data fitting to infer the background forces.

Andrew MacKellar won first prize at the SUPA Student Poster Competition 2016 for his poster on “Phase-contrast interferometry: Single-shot, phase insensitive readout of an atom interferometer”. Further details of this prestigious award can be found at the SUPA website by following this link.

We want to build an atom interferometer for inertial sensing based on our proposal for an inductively coupled ring trap for cold atoms. Our goal is to build a dual species Sagnac interferometer suitable for precision rotation measurements. Such a device has important applications in the field of inertial navigation, where the ability to accurately track position without use of GPS requires a higher sensitivity than is possible with state-of-the-art optical interferometers. Initially, ring experiments are being performed with bosonic 87Rb, however we will  investigate the enhanced (interaction-free) interferometry afforded by fermionic species (40K).

A copper ring is placed at the centre of the uniform AC magnetic field generated by a pair of Helmholtz coils (green), which inductively couples an opposing current in the copper ring to create a cylindrically symmetric, inhomogeneous magnetic field. Time-averaging of the combined fields results in a ring trap potential suitable for trapping laser cooled atoms. As there are no wires connecting to a power supply, the ring will have no end effects, and should benefit from increased smoothness due to the AC nature of the magnetic field. Combined with a pair of DC bias coils (grey) to control the position of the magnetic field zeros, this creates an ideal trap for performing precision rotation measurements using Sagnac interferometry. The trap geometry, and hence enclosed area, is also scalable by changing the size of the copper ring that defines the trap radius. 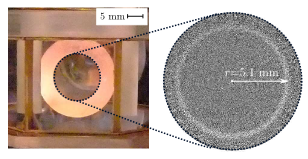 As a first step towards the interferometer the inductive ring trap concept has been demonstrated using a copper ring with internal and external radii of 7 mm and 12 mm respectively. The ring is driven with an AC field amplitude of 110 G oscillating at 30 kHz, inducing a peak current of 140 A inside the copper ring, resulting in a time-averaged ring trap of radius 5.1 mm. The figure shows experiment data obtained from loading a laser cooled ensemble of 87Rb atoms into the ring trap after 200 ms using a 4.6 G axial DC bias field. Characterisation of the trapping potential shows that it is possible to obtain a vacuum-limited lifetime within the ring trap, making it suitable for atom interferometry with long interaction times. Full details can be found in our paper arXiv:1207.4225. 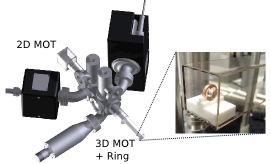 A new apparatus has been constructed for the dual species experiment which uses a two-chamber vacuum system. A high pressure vacuum cell containing 87Rb and 40K atomic dispensers will be used with a 2D MOT to create a beam of cold atoms that loads a 3D MOT in the UHV experiment cell. This ensures a high atomic flux whilst providing long lifetime in the magnetic trap to permit cooling both species to degeneracy. See construction time-lapse video.
For the interferometer a smaller copper ring is used, with an internal radius of 2 mm to give a trap radius of 1.7 mm to reduce the time taken for a single revolution in the ring. In addition, the ring is mounted vertically to exploit gravity to accelerate atoms around in 120 ms, comparable to observed coherence times for BEC, and has a cross-section to maximise optical access.
Atoms will be released into the ring trap from a crossed dipole-trap, which will also be used for performing coherent splitting into two wavepackets using an optical standing wave. As they counter-propagate round the ring the atoms obtain a phase-shift of Δφ proportional to Ω, the rate of rotation, due to the Sagnac effect. Thus by measuring the recombination phase of the wavepackets using a second coherent pulse, the rotation can be determined. Our expected rotation sensitivity is δΩ = 0.03 rad/s.
For more details see our poster (3.6 Mb).
Progress

On 2013-02-13 the first BEC in our new vacuum chamber was seen. We use a hybrid trap system, with a crossed optical dipole trap and can now create BECs of 105 atoms. 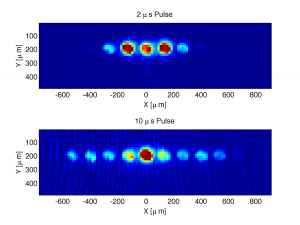 Kapitza-Dirac spitting of Condensate
We apply a short, 1-10µs long, pulse for a 7GHz detuned lattice and observe population of quantised, higher-order momentum states. We have also observed the coherent nature of this population transfer and are now ready to implement this technique as an atomic beam splitter.