seeks to develop next-generation hardware for quantum networking by using atomic ensembles coupled to superconducting microwave circuits to generate, store and entangle photons in a single chip-based device. This offers a direct route to the creation of scalable quantum networks, in addition to future integration with ultra-fast superconducting qubits to enable distributed quantum computing.

Hybrid systems offer an alternative route to fulfilling the requirements for quantum information processing by combining disparate technologies, in this case neutral atoms and superconductors. Using established techniques of laser cooling and magnetic trapping, atoms will be manipulated above the surface of a superconducting circuit. When the atoms are excited to high-lying Rydberg states, the large dipole moments lead to strong long-range interactions which ensure only a single excitation is created, which enables single photon generation. Interestingly, these interactions lead to the creation of collective states offering an enhanced atom-photon coupling strength in addition to highly directional emission for efficient coupling between single photons and optical fibres. Finally, long range entanglement between atomic ensembles can be achieved using a cavity mediated long-range interaction. Using such a system, it should be possible to generate arbitrary entangled states between multiple optical modes as a first step towards a quantum router, a key building block for scalable quantum networking. 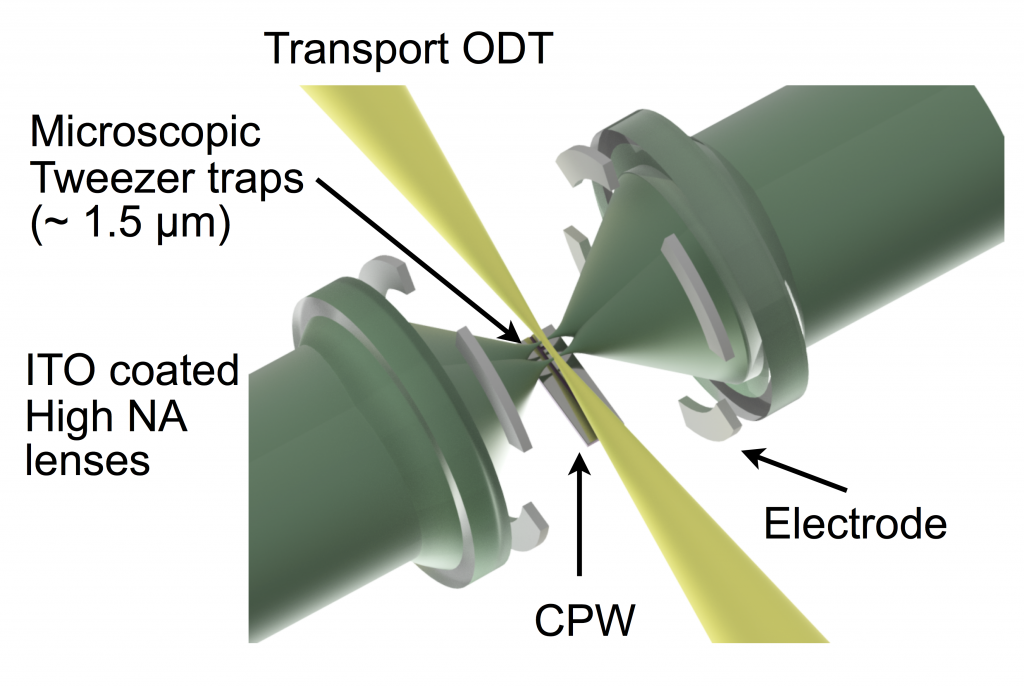 Experimental setup uses high NA lenses to create microscopic dipole traps for trapping atoms into a single blockade volume and manipulating close to the surface for a superconducting microwave coplanar waveguide resonators. Atoms are cooled in a room temperature vapour cell and transported ~ 30 cm in an optical dipole trap into the 4 K cryostat, acting as a dense reservoir for efficient loading of the micro traps.

181026 – Congratulations to Dr. Craig Picken on becoming the first Hybrid member to successfully defend their thesis – good luck in your new role at M Squared Lasers.

180917 – Lindsey Keary joins the team from the UCL CDT to begin her PhD, whilst we say farewell to Rémy Legaie as he returns to France for a teaching position.

Combining the Rydberg blockade effect with our ability to perform ground-state rotations, we deterministically prepare ground-state entanglement into a symmetric Bell state |Psi+>=(|01>+|10>)/\sqrt(2) using clock states |1>=|4,0> and |0>=|3,0>. Entanglement is verified from observation of Parity oscillations from which we extract a loss-corrected fidelity of 81%! 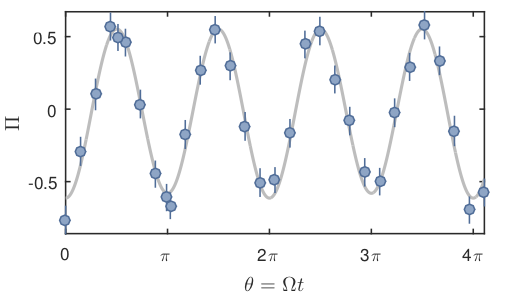 We have observed entanglement of two atoms separated by 6 um as observed in the data below from the sqrt{2} enhancement in rate of excitation of just one of the atoms when two are present compared to the case of only a single atom loaded in either trap (upper panel) as well as suppression of double excitations. Atoms start in the |4,4> stretched state and are excited to the 69S1/2 Rydberg state. 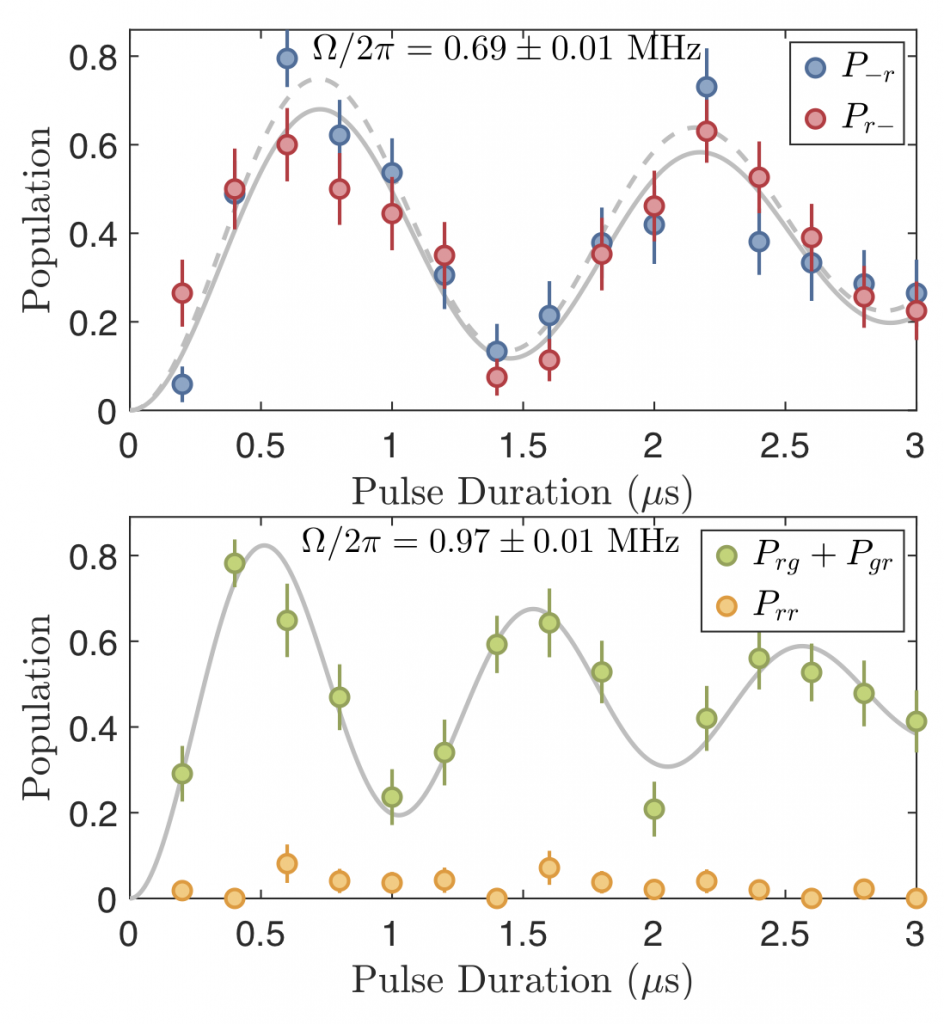 Coinciding with publication of our paper detailing our sub-kHz Rydberg excitation lasers in JOSA B we have seen our first coherent single-atom Rabi oscillations between 6S1/2 |F=4,mF=4> and 49D5/2 mj=3/2. Following optimisation of the alignment and polarisations, we are now ready to entangle our atoms. 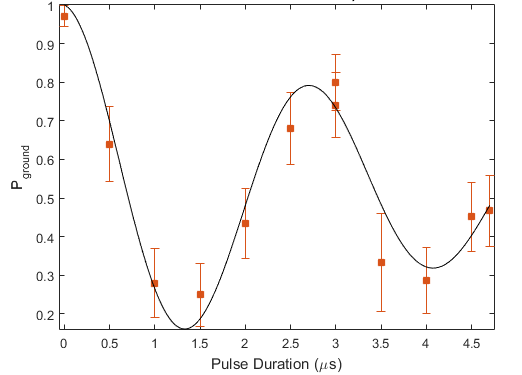 We have performed ground-state rotations from |4,0> to |3,0> using a two-photon transition detuned 120 GHz from the D2 excited state to minimise decoherence from spontaneous emission. Data below show Ramsey fringe measurements for two pi/2 pulses separated by a time T. Fitting the full time series we obtain an initial coherence time of 2 ms. We plan to improve this using a magnetic dressing technique (see PRA 81, 041805 (2010)).

New paper detailing our Rydberg excitation lasers. We stabilise 3 lasers to the same high finesse cavity made from ultra-low expansion (ULE) glass, allowing us to lock two independent Rydberg excitation lasers to the cavity simultaneously. These lasers are then frequency doubled to 509 nm, and we measure a linewidth of 130 Hz in the green, meaning <100 Hz for the IR master lasers. Using temperature tuning we are able to minimise the linear thermal expansion coefficient of the glass and demonstrate a long term drift of ~ Hz/s when measured against transitions to the 50S1/2 Rydberg state in cold atoms. This meets the requirements for narrow linewidth and low drift required for high-fidelity quantum gates with Rydberg atoms.

171001 – Katie McDonnell joins the team as part of the Quantum Radar Project. 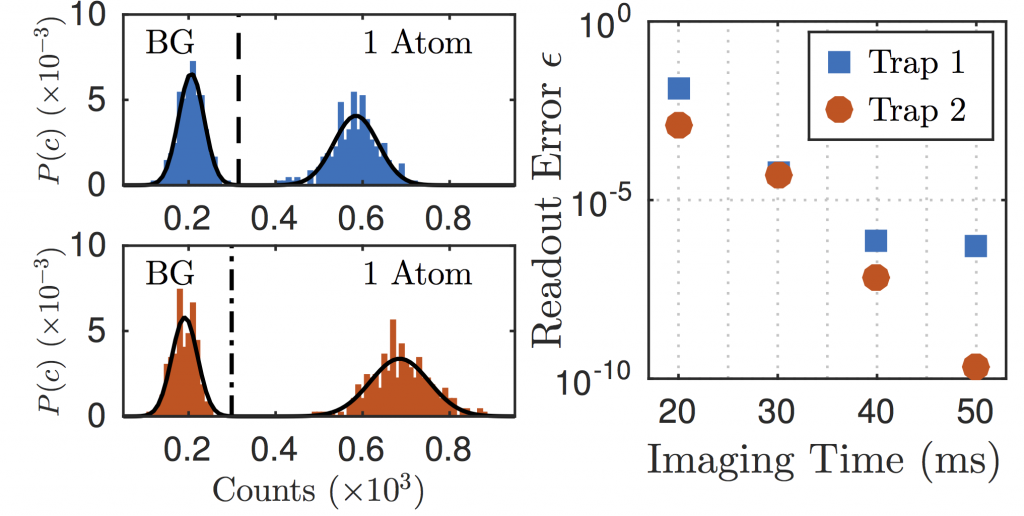 We now have two single atom traps giving us the first addressable atomic qubits in Scotland! Video below shows the two traps separated by 15 microns – we load with 60% efficiency, making it possible to see the blinking of the sites and can image with >98% retention, ideal for high fidelity qubit readout.

Open-source python library for calculating properties of Alkali Rydberg atoms developed with Nikola Sibalic, Charles Adams and Kevin Weatherill at JQC in Durham. Full details on the arXiv:1612.05529 – download source from GitHub or use the online Atom Calculator by following the link below.

Magneto-Optical Trap (MOT) finally up and running in the first stage chamber at room temperature. Atoms are loaded from background vapour and will then be transported in a moving 1064 nm dipole trap to the cold region above.

Two-photon excitation of thermal Cs atoms from 6S1/2 ground state to the 63D5/2 state using light at 852 nm and 509 nm from the homebuilt SHG system. 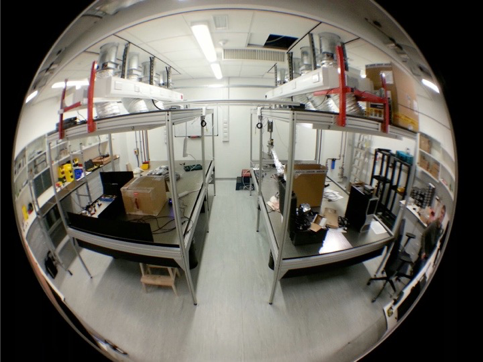