We are studying quantum gases of ultracold caesium atoms close to absolute zero temperature. Our goal is to use the quantum gases to study many-body physics in complex optical lattice potentials, such as transport problems, defects, thermalisation in open and closed systems, and quantum solitons. Please see below a list of current and past projects.

We are a small group of dedicated students and postgraduate researchers. Please contact elmar.haller@strath.ac.uk if you are interested in joining our team. 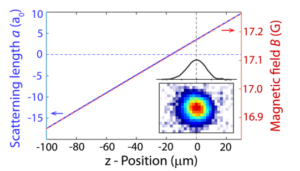 BEC with a position-dependent scattering length.

Collisionally inhomogeneous fluids exhibit spatially varying interactions between their particles. They frequently occur at interfaces, where interaction properties change due to a variation of an external potential or due to a change of the fluid’s composition. Examples for fluids at interfaces with a collisional inhomogeneity are liquid-vapour surfaces, and material junctions in condensed-matter physics.

We study the evolution of matter waves for the simplest case, i.e. a spatial gradient of the interaction strength. Starting with a Bose-Einstein condensate with weak repulsive interactions in quasi-one-dimensional geometry, we monitor the evolution of a matter wave that simultaneously extends into spatial regions with attractive and repulsive interactions. We observe the formation and the decay of soliton-like density peaks, counter-propagating self-interfering wave packets, and the creation of cascades of solitons. The matter-wave dynamics is well reproduced in numerical simulations based on the nonpolynomial Schroedinger equation with three-body loss, allowing us to better understand the underlying behaviour based on a wavelet transformation [arXiv:1908.10021]. 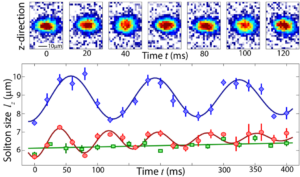 Breathing solitons after a quench.

We experimentally study the excitation modes of bright matter-wave solitons in a quasi-one-dimensional geometry. The solitons are created by quenching the interactions of a Bose-Einstein condensate of caesium atoms from repulsive to attractive in combination with a rapid reduction of the longitudinal confinement. A deliberate mismatch of quench parameters allows for the excitation of breathing modes of the emerging soliton and for the determination of its breathing frequency as a function of atom number and confinement. In addition, we observe signatures of higher-order solitons and the splitting of the wave packet after the quench [A. di Carli et al., PRL 123 123602 (2019)] 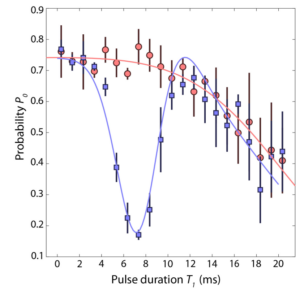 Phase-shift as one wave packet of the interferometer crosses a dipole potential.

The sensitivity of atom interferometers is usually limited by the observation time of a free-falling cloud of atoms in Earth’s gravitational field. Considerable efforts are currently made to increase this observation time, e.g. in fountain experiments, drop towers and in space. In this article, we experimentally study and discuss the use of magnetic levitation for interferometric precision measurements. We employ a Bose-Einstein condensate of caesium atoms with tuneable interaction and a Michelson interferometer scheme for the detection of micro-g acceleration. In addition, we demonstrate observation times of 1s, which are comparable to current drop-tower experiments, we study the curvature of our force field, and we observe the effects of a phase-shifting element in the interferometer paths. [A. di Carli et al., New J. Phys. 21, 053028 (2019).]